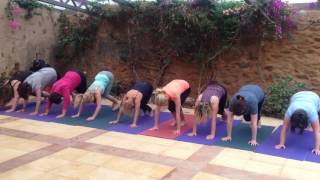 Most students aren't that fond of Plank. Let's be honest who is? So I decided that I would make it more fun on the yoga retreat, and do the Cha Cha slide moves in plank. This video was taken on the last day, and they all did amazing. It took their mind off the fact they were in plank, and much fun and hilarity was had by all. I promised not to put the video from the first day on, but believe me, they are all much improved. What a great way to tone up your core and have so